A glorious volcanic island in the Canary archipelago, Lanzarote boasts some of the most amazing geographical features in Europe. Mere miles from mainland Africa and level with the bottom of Morocco and the top of the Western Sahara, the climate is gloriously sunny and warm the whole year round. Perfect for those who wish to combine a luxurious beach break with outdoor activities and sightseeing, there is also superb nightlife and delicious local cuisine to try. Lanzarote is the place where relaxation and thrills coexist perfectly, and holidaymakers can make their escape to some of the most beautiful landscapes in existence.

Prices from
£519
Based on 7 Nights, BB, Including Flight & Hotel

Lazy sun-drenched days await in the Canary Island at the superb Be Live Experience Lanzarote Beach. Situated a short stroll away from golden sands, the fabulous holiday complex offers guests a wide variety of amenities including a swimming pool, gym,...

Prices from
£559
Based on 7 Nights, BB, Including Flight & Hotel

Wake-up in 5-star luxury overlooking a picturesque marina at the Hotel THe Volcan Lanzarote, where colonial Canarian comfort meets stunning sea views. Enjoy the range of options on offer with 4 onsite restaurants, vast sunbathing areas and even a zone...

Prices from
£589
Based on 7 Nights, BB, Including Flight & Hotel

Divine sun-kissed days and heavenly relaxation await your arrival at the sublime H10 Timanfaya Palace, on the beautiful Canary island of Lanzarote. This superb, adult-only retreat offers an ideal romantic sanctuary for couples, or is the perfect spot...

Prices from
£589
Based on 7 Nights, HB, Including Flight & Hotel

Discover the sun-soaked destination of Lanzarote on your next holiday, with a stunning beach-side stay at the VIK Hotel San Antonio. Just a short stroll outside the centre of Puerto del Carmen, this hotel has an array of desirable facilities onsite...

Prices from
£609
Based on 7 Nights, BB, Including Flight & Hotel

Prices from
£619
Based on 7 Nights, BB, Including Flight & Hotel

Families can enjoy a feast fun and entertainment at the H10 Rubicon Palace on the southern coast of the sun-soaked island of Lanzarote. This enchanting hideaway in a glorious beachfront location has everything you need for a magical holiday in the sun...

Prices from
£649
Based on 7 Nights, BB, Including Flight & Hotel

Looking out over the sparkling Atlantic Ocean in a privileged position is the Melia Salinas Hotel, sitting in the heart of the sun-soaked Costa Teguise. This chic 5-star establishment boasts indulgent accommodation and fantastic facilities good enough...

Prices from
£689
Based on 7 Nights, BB, Including Flight & Hotel

Looking out over the glittering Atlantic Ocean, the Princesa Yaiza Suite Hotel Resort offers guests a sumptuous stay in serenity with an array of fantastic facilities. On the sun-soaked isle of Lanzarote, this sprawling resort boasts everything from...

Prices from
£719
Based on 7 Nights, BB, Including Flight & Hotel

Discover the sun-soaked paradise that is the La Isla y El Mar boutique hotel, situated just a short walk from the beach within the popular resort of Puerto del Carmen. The sumptuous all-suite accommodation has a designer feel and the hotel boasts...

Experience beachside bliss on the sun-soaked island of Lanzarote for your next holiday. The Suite Hotel Fariones Playa boasts a spectacular location close to the centre of Puerto del Carmen and right beside a beautiful, soft sand beach. With pools,...

Things to do in Lanzarote

One of the most amazing sights in Lanzarote is the Parque Nacional de Timanfaya – which boasts an intriguing landscape of volcanic rock that is reminiscent of a Martian or prehistoric landscape. Just a few metres below the ground here, temperatures can reach up to 600 degrees Celsius, and there’s even a restaurant – El Diablo – that cooks its food over a hole in the ground using geothermal heat! Another volcanic feature to visit is the Cueva de los Verdes – the longest lava tube in the world – that leads visitors into a weird and wonderful underground world. For a spot of shopping, the best place to visit is the huge Sunday market in the wonderful ancient Villa de Teguise. Of course, Lanzarote has a plethora of gorgeous beaches, but for something really different, pay a visit to the Playa Quemada or “burnt beach” near Puerto Calero. It is so named because of its unique black sand. Finally, if you just want to let go and dance the night away, both Playa Blanca and Puerto del Carmen boast some of the very best bars and restaurants on the island.

Weather in Lanzarote: The island sits on the end of the archipelago that is closest to Africa and, as a result, it is the hottest of the canaries. Very little rain falls throughout the year, but, depending on what is called the Canary Current, caused by a cooling North-easterly trade wind, Lanzarote’s temperature is rarely unbearably hot. The best time for 5 star holidays in Lanzarote is in late Spring, when temperatures are balmier.

The magical island of Lanzarote is blessed with a myriad of magnificent beaches which will help to make your holiday in the sun an unforgettable experience.

From long sandy beaches offering a feast of fun for all the family to charming sandy inlets and coves which provide secluded privacy and relaxation, this sun-kissed Canarian getaway has it all.

Lanzarote is a volcanic island but is has many golden sandy beaches, rather than those only comprising black volcanic ash, as is the case in some of the other Canary Islands.

Arrecife has its own expanses of sand which are key to the success of any beach holiday in the island’s capital. El Reducto Beach is the main one and a huge range of water sports and other activites make it ideal for families. The beach is nestled in a gorgeous bay and there are plenty of restaurants and bars on the promenade for wining and dining. Other popular Arrecife beaches are El Cable and La Concha.

Playa Grande is a huge sandy beach in the heart of Puerto del Carmen, a bustling resort which is packed with shops, bars and restaurants. This vibrant town offers a wealth of entertainment day and night, with exciting beach parties, live shows and thrilling water sports among the attractions.

Stretching for a mere 100 metres, Playa Chica beach near Puerto del Carmen is a mini marvel which is admired for its beauty. The fabulous resort of Costa Teguise has several superb beaches including Playa Cucharas which is a long and inviting sandy expanse. Other options are Los Charcos, Playa Jablillo and Playa Bastian.

Playa de Papagayo - a beautiful beach near the resort of Playa Blanca - is renowned for its powdery golden sands and clear waters which are ideal for snorkelling enthusiasts.

Surfing enthusiasts are drawn to Playa de Famara, a long and impressive beach on the north west coast of the island which is notable for its strong winds and huge waves.

Playa Flamingo is a very popular sandy beach which is sheltered by two breakwaters, making the calm waters perfect for children to swim and paddle in safely. The nearby promenade has several bars, restaurants and souvenir shops. 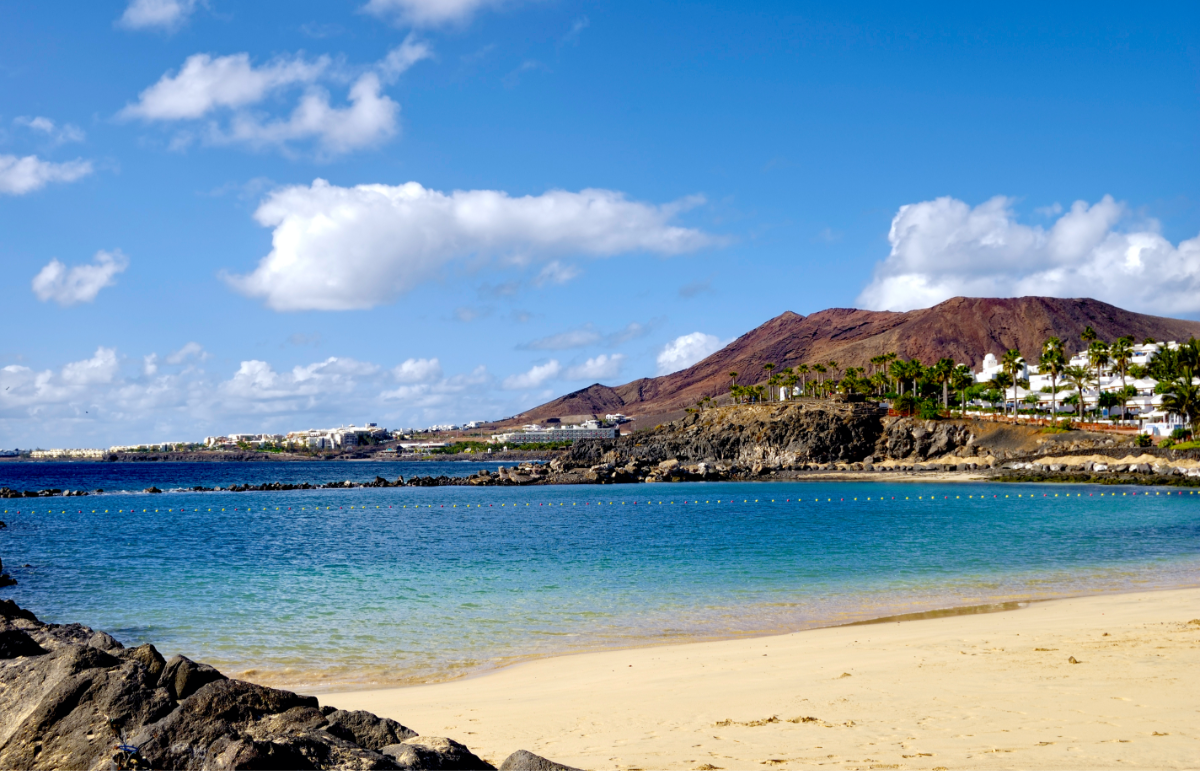 Events and Festivals in Lanzarote

Lanzarote has an abundance of festivals, fiestas and major events throughout the year to entertain visitors to this wonderful Canarian island.

This takes place on many parts of the island in February and March but the main carnival action can be found in Arrecife and Puerto del Carmen. A host of decorated floats, amazing costumes, dancing and music brings everywhere alive as the crowds take to the streets.

This religious celebration is the island’s most colourful event and takes place in Mid-June. Among the attractions are the decorating of the streets of Arrecife and Haría with carpets of coloured salt.

This magnificent fiesta takes place in August in honour of Arrecife's patron saint San Gines and culminates with a massive fireworks display on the main beach promenade.

This takes place in May and features colourful decorated crosses which are covered in beautiful flowers (Cruces de Mayo). A packed programme of events is held in public plazas across the island Events and include traditional dancing in authentic Canarian costumes.

This impressive spectacle is held in honour of the island's patron saint and attracts huge crowds in Canarian dress. A key location in this fiesta is just outside the village of Mancha Blanca where the flow from a volcanic eruption came to a halt in 1824.

What to eat in Lanzarote

There’s so much more wonderful food to sample during your holiday in Lanzarote, beyond the traditional favourites of tapas, paella and Canarian potatoes.

The islanders really love fish and you will find many dishes prepared using a range of methods including boiling, baking, grilling, salting and frying.

Gambas al ajillo is found in many eating places and features large prawns cooked to perfection in olive oil, brandy chilli and garlic.

A speciality on the island is escaldon de gofio de caldo de pescado, a delicious rich fish stew which includes gofio - a Canarian flour made from roasted grains - and a hearty selection of fresh vegetables.

Popular desserts in Lanzarote include frangollo, a corn-based milk pudding flavoured with cinnamon, honey and brandy, and torrijas which are sweet maize flour fritters with honey and cinnamon.