The largest island in the Caribbean, Cuba is a unique destination with so much to offer in the way of luxury holidays. From mesmerising beaches and gorgeous weather, to tantalising cuisine and fascinating history this colourful nation has been capturing imaginations for decades. A former Spanish colony with a rich culture and one of the last surviving communist regimes, a visit to this awe-inspiring destination offers an unforgettable, breath-taking Caribbean experience. As well as receiving a warm welcome, you will also find a wide variety of luxury accommodation to choose from, with options for families, couples and friends. Whether you’re looking to explore the historic capital of Havana, or hit the beach in Varadero, there’s an hotel or resort to suit every need. Take a closer look at what’s on offer and book your luxury holiday to Cuba today with Destination2.co.uk.. 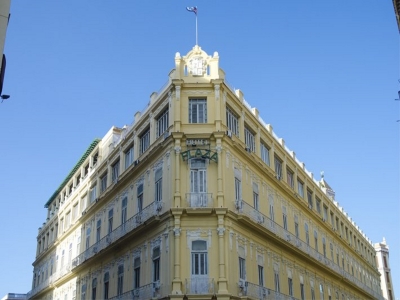 Prices from
£649
Based on 7 Nights, Bed & Breakfast, Including Flight & Hotel

Experience the charm and character of Havana with a stay at the historic Gran Caribe Hotel Plaza. Standing in a prime location in Old Havana, the delightful building is an ideal base from where to explore Cuba’s splendid capital city, offering a...

Prices from
£719
Based on 7 Nights, Bed & Breakfast, Including Flight & Hotel

Situated in the heart of Havana’s classy residential district Miramar, Memories Miramar Havana Resort boasts easy access to all of the city’s sights and nightlife including fabulous views of the ocean via Club Habana Beach. The resort offers a multi... Prices from
£819
Based on 7 Nights, Bed & Breakfast, Including Flight & Hotel

Looking out across the Gulf of Mexico, the delightful Chateau Miramar offers a fantastic base from which to explore the sights and sounds of Cuba’s vibrant capital Havana. Located in the classy Miramar district of the city, the hotel boasts a number of... Prices from
£1459
Based on 7 Nights, All Inclusive, Including Flight & Hotel

Luxurious beach days, sunny swings on the golf course and fun-filled salsa nights are all part of every day life at the Tuxpan Hotel in Varadero. This attractive, family-friendly resort is surrounded by lush tropical gardens and sits next door to the... Prices from
£1529
Based on 7 Nights, All Inclusive, Including Flight & Hotel

Embrace laid-back island life, with a stay at this fabulous family-friendly hotel in the Caribbean paradise resort of Varadero. Situated just a stone’s throw away from the silky soft sands and heavenly turquoise waters of Varadero beach, Brisas del... 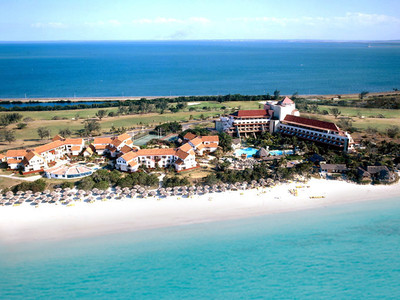 Prices from
£1629
Based on 7 Nights, All Inclusive, Including Flight & Hotel

Overlooking the beautiful golden sands of Varadero Beach, Breezes Bella Costa Hotel is set to welcome you for a heavenly holiday in Cuba. The refreshing swimming pool is ideal for a cooling dip, while there’s a tasty choice of restaurants at mealtimes...

Flights: You can fly to various parts of Cuba direct from Manchester or London Gatwick.

Passport/visa requirements: Your passport should be valid for the duration of your stay in Cuba. You'll need to get a tourist card before you travel, allowing you to stay up to 30 days in the country.

Packing essentials: May to October is Cuba’s rainy season, but it experiences less rainfall than most of its Caribbean counterparts. The summer months are extremely warm and humid with the winters cool in comparison. Therefore, light, cool clothing is essential all year round. As is sun cream and a sun hat. It is also worth packing a waterproof jacket.

Like most places in the Caribbean, Cuba is blessed with fantastic beaches, exceptional weather and pristine waters.

The popular resort of Varadero is a two-hour drive from the capital Havana, and is blessed with high-quality hotels and resorts. Varadero is flanked on all sides by rolling beaches that are hailed as some of the world's best, and is a perfect destination for swimming and snorkelling in the clear blue waters of the Caribbean Sea. Later, enjoy a rum cocktail while savouring one of Cuba’s heavenly sunsets and contemplating the prospect of a day trip to magnificent Havana.

Magical Havana is bursting with charm and character. Its stunning architecture and classic American Chevrolets make it a photographer’s dream. The people are famously joyous and hospitable, and Havana beats to the rich, vibrant, layered and soulful music of the Cuban people. A meander through the streets offers an experience matched by no city in the world, set along a dramatic coastline and with scenic natural harbours and ports as stunning backdrops.

Cuba is a fascinating and exotic land, and offers much more than the Havana-and-the-beach holiday most tourists generally experience. It’s a wonderful island to explore.

The fascinating city of Trinidad in the south is a highlight, with this authentic Spanish colonial town now a living museum to its 18th- and 19th-century heritage. In Trinidad you’ll feel like you’ve stepped back in time, while visits to Baracoa and Santiago de Cuba to the east, famous for their music and cuisine, offer a spicy and vibrant alternative to the main tourist spots.

Cuba is a magical country unlike anywhere else in the world. Visitors are enriched by the unique experience of Cuban life through its architecture and the exuberance of its people. Whether you want a traditional Caribbean beach holiday or to experience beautiful Havana in all its glory, Cuba makes for an unforgettable travel experience.

The weather in Cuba is subtropical, with temperatures averaging between the mid-20s to low 30s throughout the year. Peak season for tourists is between November and March, when temperatures are cooler and drier, as well as July and August. June and September are wetter months.

You love adventures, and want to mix culture with relaxing on the beach.

Taking place in January each year, this internationally-renowned event attracts the great and the good of the jazz world to Havana, with performances taking place right across the city.

Considered the island’s biggest and best carnival event, the Santiago de Cuba Carnival takes place every July. The colourful event sees the whole city of Santiago de Cuba turn out to join in the festivities, which include music, dancing and dazzling parades.

The anniversary of Fidel Castro’s failed 1953 assault on Santiago de Cuba’s Moncada Barracks is marked every year on July 26. Regarded as the date when the movement that became the Cuba Revolution started, the event is celebrated with a national holiday.

It’s Havana’s time to party in August, with music, dancing, fireworks and parades drawing the crowds to the capital.

If Caribbean beaches were a music festival, Varadero in Cuba would headline every single time. .

This 20km (that’s not a misprint) stretch of pristine coastline boasts some of the most perfect sand and waters imaginable.

Despite a number of mega hotels and huge resorts appearing along Varadero Beach, those have failed to make much of a damaging imprint on the stunningly-beautiful Hicacos Peninsula.

Santa Maria del Mar beach is another of Cuba’s gems. It has the unique bonus of being just 20 minutes from Havana, and is the perfect place to swap hectic city life for laidback beach bliss.

Locals regularly flock here, with Santa Maria del Mar being the main beach of the 9km strip. Be warned, if you head here in the height of summer you’ll struggle to place your towel down. Fear not, however, as Cuba has year-round sunbathing weather.

Sitting on the small resort island of Cayo Largo, is without doubt the best hidden gem of the whole country – Playa Paraiso Beach.

In fact, it was even voted in the top three beaches in the world back in 2016.

It needs little explanation, but if you’re looking for a standout, we think Playa Paraiso may be just that.