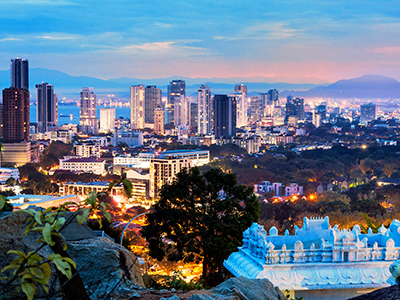 £919
Discover the wonders of Penang with a sensational 3-star Malaysia holiday that will be remembered forever. Browse the fabulous hotels and resorts on offer and prepare for the experience of a lifetime.
View Details

£999
Captivate the senses in Malaysia with a 4-star holiday in Penang. Choose from our wonderful selection of accommodation and prepare to enjoy the many delights on offer in this spectacular destination
View Details 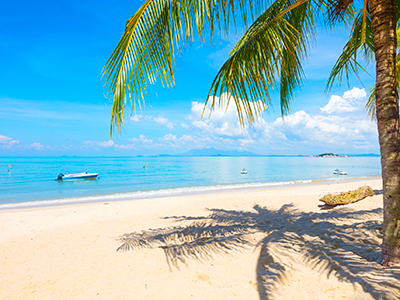 £1169
An inspiring combination of dazzling cityscape, glorious beaches and vibrant culture make Penang an exceptional choice for a 5-star holiday in Malaysia. Take a look at our superb range of hotels and resorts and start planning your dream escape today.
View Details

To the North East of the Malaysian Peninsular lies the exciting and bustling state of Penang. Often called ‘The Pearl of the Orient’, Penang’s vibrant culture and dazzling cityscape attracts thousands of explorers and holidaymakers each year. Prior to becoming a hub of activity driven by tourists and locals alike, Penang, or Pulau Pinang as it was originally called, was a stunning paradise with it’s sugar white beaches laying mostly untouched. Nowadays its paradisiacal beaches still remain, but they lay parallel to the bustling and vibrant city of George Town – the visually stunning and captivating capital city of Penang.

Things to do in Penang

Upon visiting Penang, you are sure to be taken in by the exciting city of George Town – the state’s capital city and one of the most popular tourist destinations in South East Asia. George Town received UNESCO World Heritage status in 2008 and since then has been a hive of activity, attracting travellers from across the globe. To explore George Town is to marvel at some of the breath taking architecture that makes up the city skyline. From futuristic skyscrapers to traditional and beautiful mosques, you are sure to be mesmerised by this modern yet authentically Malaysian city.

If you would like to see some traditional temples that ooze Eastern culture then you will be spoilt for choice in George Town. If you only have time to see one during your visit, then make it the Han Jiang Ancestral Temple on Chukia Street. Six Chinese immigrants built the temple in 1885 after they joined together to purchase a Malaysian house, which they then converted. It was awarded the UNESCO Asia- Pacific Heritage Award in 2006 for Culture Heritage Conservation and is one of the most recognised buildings in George Town.

If you would like to have a break from the hustle and bustle of George Town, then the stunning white sands of the Batu Ferringhi beach makes this an ideal place to kick back, relax and soak up the glorious tropical sunshine. With the warm turquoise sea lapping at the powdery white sands, you would be forgiven for thinking that you had stepped into a post card!

For a luxury beach holiday offering relaxation, recreation and tropical beauty, look no further than the stunning shores of Penang. Whether seeking tranquil sands, extravagant waterfront hotels or activities galore, this sublime Malaysian destination has it all and much more besides. The beaches of Batu Ferringhi and Tanjung Bungah are superb choices for luxury beachfront accommodation, along with water sports and a whole host of seaside dining venues. For a serene experience, seek out the nearby shores of Miami Beach, or maybe take a boat trip to Mas Beach or Kerachut Beach, in the Teluk Bahang area, where you can unwind in the sun and enjoy a refreshing dip away from the crowds. Discover the captivating shores of Penang for yourself. Browse the luxury accommodation available and book the beach holiday of a lifetime today with Destination2.co.uk.

As the state of Penang is located so close the equator, its temperature throughout the year experiences little no change with an average of around 31 degrees all year round. Like the rest of Western Malaysia, the best time to visit Penang is December through to February, as this is when you are less likely to experience tropical showers.

You want to have some perfect photo opportunities with some stunning traditional Eastern architecture whilst you are heading towards a sugar white beach to relax on.