Immerse yourself in the culture of Southeast Asia with the trip of a lifetime to Siem Reap.

Located in North Western Cambodia and also known as ‘the gateway to Angkor Wat’, this intoxicating city offers up vibrant, bustling markets as well as breath-taking rurality.

Follow in the footsteps of Tomb Raider through the world-renowned temples, embark on a luxury voyage through the stunning hotels and spas, or muse at the incredible ecosystem that thrives at Tonie Sap lake. 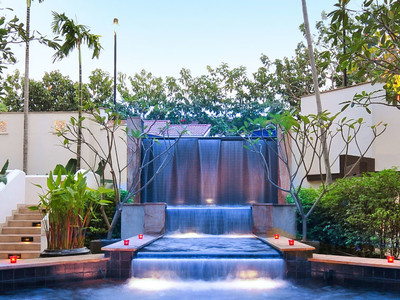 Escape to culture-soaked Cambodia and explore the vibrant markets and ancient temples with a stay at the Tara Angkor Hotel. Located in an idyllic setting on the outskirts of Siem Reap centre, this luxury hotel offers sumptuous spa treatments, creative... 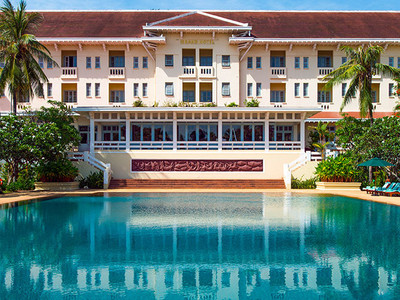 Experience old-Asian charm and colonial grandeur at the Raffles Grand Hotel D’Angkor, Siem Reap. This sensuous establishment first opened its doors in 1932 and still obtains original features such as the lobby cage elevator. Located in the Old... 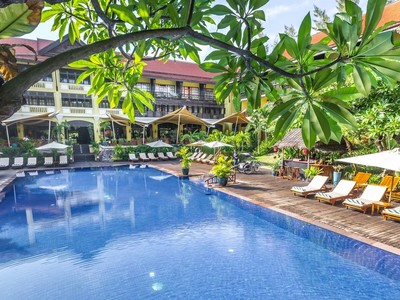 Immerse yourself in rich, Asian history with a stay at Victoria Angkor Wat hotel. Close to the UNESCO World Heritage site of Angkor Wat and the bustling city centre of Siem Reap, this is the ultimate culture trip not to be missed. The hotel is...

Immerse yourself in absolute luxury at the Borei Angkor Resort and Spa, where tropical gardens and a vast, serene pool awaits. Located in the intoxicating city of Siem Reap, Cambodia, this is the perfect location from which to explore temples and... 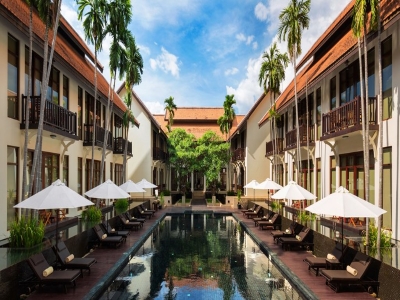 Immerse yourself in the illustrious history of South East Asia with the trip of a lifetime to Cambodia. The Anantara Angkor Resort and Spa is your grand gateway to the fascinating ruins of Angkor Wat and the sprawling, intoxicating city of Siem Reap.... 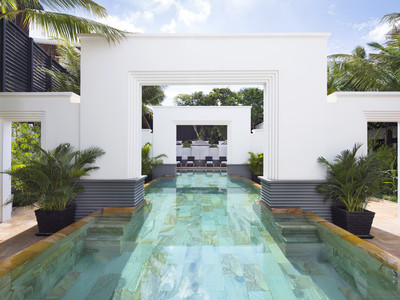 Immerse yourself in the enchantment of Siem Reap, during a stay at the fabulous Park Hyatt. This splendid 5-star hotel offers a serene sanctuary from where you can venture out to discover the spectacular temple of Angkor Wat and the vivid, traditional... 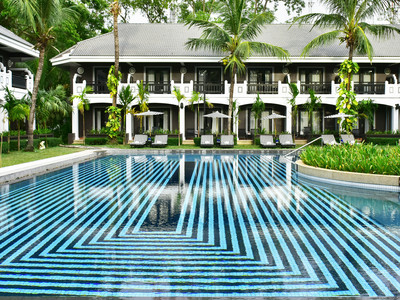 Siem Reap is a spectacular city which leaves a lasting impression on anyone who visits - there's so much more to see and do there than simply gaze in awe at the iconic Angkor Wat temple complex.

From stunning historical and cultural landmarks to superb restaurants and vibrant nightlife, Siem Reap has something to make your holiday to Cambodia an unforgettable experience.

Magnificent colonial buildings, amazing temples, enthralling museums and an abundance of excellent shops and markets are among the many attractions that make Siem Reap a must-see city.

No visit to the city would be complete without seeing some of the amazing ancient pagodas and shrines.

Among those you should try to check out are Wat Damnak, the biggest pagoda in the city where many Buddhist monks live, Wat Bo Pagoda which is one of the oldest in Siem Reap and Wat Preah Prom Rath which is a truly beautiful sight.

There are many shrines to see including the highly revered one in honour of Preah Ang Chek and Preah Ang Chorm which is located near the royal residence and the shrine to Ya Tep which is found under a huge tree on the River Road to Sivatha Boulevard.

Angkor Wat is the imposing world-famous temple complex at Angkor which was built in the 12th century for King Suryavarman II. As the oldest and largest religious monument in the world, it's no wonder people flock from around the globe to see it.

Tonle Sap, one of the largest freshwater lakes in Asia, is located around 15km south of Siem Reap. It's definitely worth visiting this giant expanse of water which is home to more than 200 species of fish and more than 100 types of birds. The enchanting mangrove forests there are inhabited by crocodiles, turtles, otters and macaques and a myriad of other wildlife.

Siem Reap is a shopper's paradise with everything from street stalls and art centres to charming boutiques and large shopping arcades. A great place to grab a bargain is the Phsar Chas, a delightful old market and Angkor Night Market off Sivatha where the range of merchandise includes silks, woodcarvings, jewellery, antiques, textiles and handicrafts.

It's also worth trying to catch a traditional Khmer dance performance during your time in the city. These provide truly colourful and thrilling experiences for audiences.

An excellent attraction for families is the Boeng Peariang Bird Sanctuary, a biosphere reserve near Siem Reap which is home to 175 rare species of large water birds including spot-billed pelicans, milky storks and grey-headed fish eagles.

Other fantastic attractions in the Siem Reap area include Angkor National Museum and the Cambodian Cultural Village which provides a fascinating overview of the country's rich history and culture. There’s also a fantastic water park which offers a splashing time for families.

Helicopter rides and trips in hot air balloons have become very popular with holidaymakers who want to get a bird's eye view of Siem Reap and the imposing surrounding landscape.

This enthralling city really excels when it comes to food and visitors will experience a kaleidoscope of fabulous flavours. As you would expect, traditional Khmer food is to be found everywhere, but you'll also come across many other cuisines in the city's myriad of restaurants. These include Thai, Vietnamese, Chinese, Korean, Japanese, Italian, German and Indian.

Pub Street is a famous area in Siem Reap where you can soak up the vibrant atmosphere and enjoy a meal and drink in a host of lively bars and restaurants. It is also home to many vibrant nightclubs where you can party from dusk till dawn. Other more laid-back haunts for some evening entertainment can be found in the Wat Bo and Old Market areas, and along the river road on Sivutha Boulevard.

When you're feeling exhausted after touring around Siem Reap all day you can treat yourself to some welcome pampering at one of the city's many massage shops or spas.

Events and Festivals in Siem Reap

This major 3-day celebration in November marks the end of monsoon and the incredible natural phenomenon where the flow of the water between the Tonlé Sap Lake and Mekong River changes direction. Several colourful boat races are held on the Tonlé Sap and the river in Siem Reap. Each boat has more than 40 rowers and the event is hugely popular, attracting massive crowds. A range of other activities take place including music concerts, fireworks displays, riverside markets and plenty of partying in Pub Street.

This popular event takes place in November to showcase the work of promising photographers. A series of photographic exhibitions and workshops are staged in many locations across Siem Reap.

This popular event every December in Siem Reap attracts over 8,000 runners each year from more than 70 countries. Part of the route is through the amazing Angkor temples area and all money raised goes to victims of landmine explosions and other important causes. A series of bike rides are staged before the main running event.

What to eat in Siem Reap

Samlor machu kroeung is a hearty sweet and sour soup containing diced beef ribs and succulent tripe which are stewed in kroeung paste, lemongrass, water spinach, coriander leaves and turmeric. Peanuts are often added for extra flavour and the soup is often accompanied by white rice and chilli flakes.

A popular dessert is Num kom which is a steamed sweet and sticky rice flour cake containing a mung bean filling. Another favourite in Siem Reap is Taro-style dumplings cooked in coconut milk and ginger sauce, with a portion of ice cream.