The literal translation of its name is “Strong Fortune”, but others argue that it is a mistranslation of the French for “Grand Adventure”. Whether true or not, we think the latter is the most fitting for Fuerteventura, as it’s simply brimming with possibilities! Beachside activities are popular on the island, whether those involve sunning yourself on the gorgeous white sand or trying your hand at surfing, kite surfing, sailing or diving. The cliff faces and coves that interrupt its coastline make for breath-taking beauty spots, and Corralejo, El Cotillo or Jandia are excellent urban escapes in which to enjoy some retail therapy and perhaps sample the nightlife!

Prices from
£619
Based on 7 Nights, Bed & Breakfast, Including Flight & Hotel

Lazy days and entertaining nights await at Secrets Bahía Real Resort & Spa, a sensational 5-star adults-only escape in Corralejo in the sun-kissed island of Fuerteventura. Wake up to the sound of gentle waves lapping on the beach, before heading off...

Special Offer
UP TO 35% OFF* BOOK NOW & SAVE!*All savings are applied to the prices shown when applicable, available for travel dates up to 31st October 2022.BOOK NOW WITH UP TO 35% OFF*
Select
KN Hotel Matas Blancas

Prices from
£309
Based on 7 Nights, Bed & Breakfast, Including Flight & Hotel

Chase the sun to the magical island of Fuerteventura for a sensational adults-only holiday at the KN Hotel Matas Blancas, in the tranquil resort of Costa Calma. This modern retreat is an ideal choice for anyone craving blissful days of pure relaxation,...

Prices from
£379
Based on 7 Nights, Self Catering, Including Flight & Hotel

Recline and relax on the sun-soaked shores of Fuerteventura during a heavenly holiday at the Barcelo Castillo Beach Resort. Located beside the sand in Caleta de Fuste, this appealing retreat offers an idyllic haven for those seeking to revive their...

Prices from
£409
Based on 7 Nights, Bed & Breakfast, Including Flight & Hotel

Escape to the sun-soaked island of Fuerteventura with a stay at the VIK Suite Hotel Risco Del Gato. Here you can enjoy the privacy of your own unique suite and spend lazy days around the glittering turquoise pool. The white sand beaches of this...

Prices from
£479
Based on 7 Nights, Half Board, Including Flight & Hotel

Discover a fabulous adult-only holiday playground on the island of Fuerteventura at the Barcelo Corralejo Bay. Sitting within very easy reach of the blonde sands and shimmering waters of Playa de los Verilitos Beach, this superb hotel is a splendid...

Prices from
£499
Based on 7 Nights, Bed & Breakfast, Including Flight & Hotel

If you like to spend your down time on the fairways and enjoy soaking up the sun in scenic surroundings, then the adults only Elba Palace Golf and Vital Hotel is for you. Located on the paradise island of Fuerteventura amidst the stunning grounds of...

Prices from
£499
Based on 7 Nights, Bed & Breakfast, Including Flight & Hotel

Escape to the sumptuous beach-front haven of the Sheraton Fuerteventura, where lush tropical foliage and excellent services await. Choose from the 4 outdoor pools or the beach itself for a place to while away the hours with a cocktail. For any keen...

Prices from
£539
Based on 7 Nights, Half Board, Including Flight & Hotel

Holiday paradise awaits at the sensational Iberostar Selection Fuerteventura Palace, an adults-only getaway on the captivating island of Fuerteventura. Dining options include a top-class Japanese restaurant and a charming pool bar is the place to relax...

The Alua Suites Fuerteventura is a 4-star hotel that is located in the heart of Corralejo, next to a white sandy beach. This all-inclusive resort features eight swimming pools and various other leisure amenities such as a children’s club, gym, spa, and...

The Barceló Fuerteventura Mar is a superb choice for a holiday in the Canaries. This hotel offers modern rooms and direct access to a peaceful beachfront, and boasts a range of leisure facilities such as swimming pools, a children's club, and a mini...

Situated in the southern part of the island of Fuerteventura, the Fuerteventura Princess is a sublime resort ideal for couples or families seeking an unforgettable sunshine holiday in the Canary Islands. Fitted with a selection of comfortable...

The H10 Ocean Dreams is a boutique adult-only complex that offers a blend of service and style. It's perfect for couples or solo travellers seeking a break from the hustle and bustle of daily life. Comfortable rooms and a large saltwater pool are some...

The H10 Ocean Dunas is a sublime adults-only hotel offering tranquil days of relaxation. Ideal for couples seeking a romantic getaway, the complex boasts comfortable accommodation and an ideal location just moments away from a sun-soaked beach. Guests...

Located on the sunny island of Fuerteventura, the H10 Ocean Suites is a sublime getaway destination for families or couples hoping to escape the stresses of modern life. Situated near a number of sun-kissed beaches and boasting a range of leisure and...

For those seeking a relaxing sunshine getaway on the stunning island of Fuerteventura, the H10 Playa Esmeralda is waiting for you. Ideally located on the beachfront and boasting comfortable accommodation, this is a sublime holiday destination for...

The H10 Tindaya is a sublime hotel that is located in sunny Costa Calma, just a few minutes away from the beach and the south waters of the island of Fuerteventura. Perfect for families and couples hoping for a memorable getaway. Its various features...

The Meliá Fuerteventura is a 4-star hotel that is located in the southern part of the island of Fuerteventura, near the Sotavento Beach. This area is known for its natural beauty and is a great place to spend the day. Its various swimming pools are...

Things to do in Fuerteventura

Take a little break away from the main island and take a trip to the astonishing nature reserve that is Isla de Lobos. While its name translates as “Island of Wolves”, don’t worry – the wolves referred to are actually the “sea wolves” or monk seals that once colonised the island, but now only rarely appear there. The island is home to a great deal of interesting flora and fauna, along with fascinating volcanic geological features. Fuerteventura also boasts the biggest beaches in the Canaries, making it extremely popular with sun worshippers and surfers alike. Also definitely worth a visit is the ancient town of Betancuria, once the capital of the Canary Islands, dating back to the 13th Century and offers fantastic sightseeing as visitors wander amongst the archaic architecture. Fittingly, the town is also home to Fuerteventura´s Museum of Archaeology and Ethnography. Sampling the local food is an excellent idea, as the island not only offers excellent seafood but its stewed or roasted goat’s meat is also a fabulous delicacy, as is its very delicious goat’s cheese.

While still very warm and pleasant, Fuerteventura tends to be a little cooler than the surrounding Canaries and the mainland of Spain, so suits those who enjoy pleasant warmth but not extremes of heat. Another suggested translation of Fuerteventura is “strong wind”, and the breeze is indeed rather stronger here than on the other islands, which helps with popular water-sports such as wind and kite surfing. May and June are usually the best months to visit as the weather is still excellent, but the summer crowds will not yet have reached full force!

The enchanting island of Fuerteventura has more than 150 sandy beaches, making it the perfect escape for a magical holiday experience.

You’ll discover miles and miles of jaw-dropped sandy expanses, ranging from lively popular beaches where you take to the sea for a host of thrilling water sport activities, to quiet and remote hidden gems where you can relax and escape the pressure of everyday life.

Whether you are a family craving an action-packed beach holiday on the sand or a couple wanting a romantic barefoot stroll in an idyllic sandy cove or bay, the charming island of Fuerteventura can meet your needs.

Many of the most impressive beaches in this captivating Canary Island can be discovered in the Jandia area. Morro Jable, Sotavento, Costa Calma and Butihondo are among the most popular.

The beaches at El Pozo are a magnet for water sports enthusiasts and you’ll find plenty of activity going on there including jet skiing, windsurfing and sailing.

The popular resort town of Corralejo is home to an amazing beach which stretches for around 6 miles and has plenty of rolling sand dunes. The sea water here is calm and warm, making it perfect for swimming, diving and snorkelling.

Fuerteventura is a favourite destination for naturists and one of the most popular beaches to go ‘au naturale’ and achieve an all-over tan is Cofete Beach, an unspoiled stretch of golden sand on the southern tip of the island. Other places in Fuerteventura which permit nude sunbathing and swimming are Tindaya Beach, Playa del Águila and La Cala de Cotillo.

The sandy beach at Caleta de Fuste is a firm favourite with families and stretches for more than 800 metres. There are plenty of sun loungers and shades here for catching some rays and an impressive range of bars and restaurants.

Another beautiful beach is Playa Esmeralda on the suitably-named Costa Calma where the waters are incredibly calm and inviting.

Gran Tarajal beach is a favourite spot for anglers, Esqunzi beach on the north of Fuerteventura is very popular with surfing enthusiasts and La Concha beach on the north west of the island is a glorious spot with its 200 metres of fine white sand. 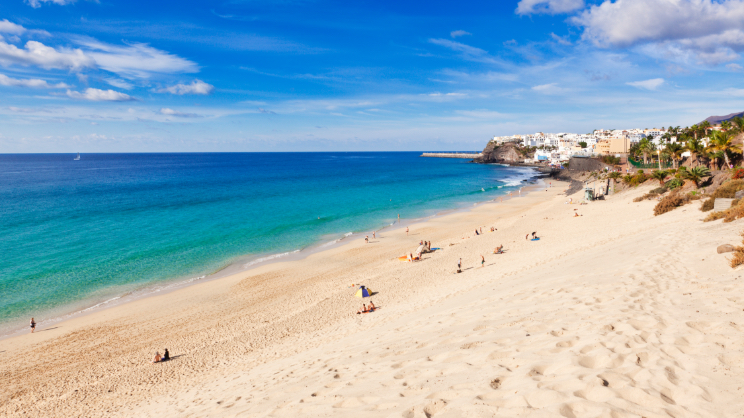 Events and Festivals in Fuerteventura

There’s no shortage of traditional festivals, lively fiestas and major events during the year to entertain visitors to Fuerteventura.

This is staged during February and March in Corralejo, Morro Jable and Puerto del Rosario. It is a truly spectacular affair with each town hosting a range of activities including fun fairs, parties and live music events.

This is held in El Cotillo from late June until early July. It is a bumper summer music extravaganza featuring big name bands and musicians from all over Europe.

Held on the first Sunday of October, this fiesta takes place in Puerto del Rosario and involves a range of activities to celebrate the Patron Saint of Fuerteventura’s capital.

This fun-packed event takes place in Gran Tarajal in September and features more than 100 circus artists from around the globe. As you would expect, this is a big favourite with children.

The festival of Saint Bonaventure, in honour of the patron saint of Betancuria, is held on July 14. The procession, which became official in 1456, features rondalla serenade groups who add a captivating musical aspect to the event.

What to eat in Fuerteventura

Fuerteventura has something to excite the palate of every visitor to the island - it has an impressive range of traditional dishes and specialities which are definitely worth trying during your stay.

Ropa Vieja is a hearty stew often served on the island where pork, chicken, beef or choritzo can be used as the main ingredient. This is added to several other ingredients including chopped tomatoes, chickpeas, onions, peppers, potatoes, garlic, saffron, thyme and paprika. It is often accompanied by rice or Canarian potatoes.

Fuerteventura is renowned for its fabulous cheeses. Among them is the mahorero cheese which is made from goat’s milk and has swept up awards at many international contests.

Carajacas is a popular liver where beef or veal livers are marinated in olive oil, garlic, oregano, cumin, peppers and parsley before being fried or roasted and accompanied by mojo sauce.

The locals of Fuerteventura love fish and you’ll find a huge range of seafood dishes at eating places across the island. Octopus, sardines, grouper, parrotfish, squid, limpets, sea bream and cuttlefish are among the most popular choices.

Sancocho is a traditional fish stew made with corvina, grouper or sea bass which is cooked with potatoes, mojo sauce and gofio, a Canarian flour made from roasted grains.

A popular dessert on the island is Prince Albert, a scrumptious chocolate mousse, combined with cream and packed with almonds and hazelnuts.