Escape to an island of craggy white-sand coves, glistening azure waters, and pretty harbour towns. Menorca is not just the answer for fun-packed family escapes, it’s also renowned for the perfect cycling and sports conditions, as well as being the ideal, laid-back romantic retreat. Named a UNESCO biosphere reserve in 1993, the most popular activities on the island include hiking, water sports and visiting historical sites. Much of the nightlife occurs in the island’s two main cities, Ciutadella and Mahon, where there is also much culture and sightseeing to be enjoyed by day. The island boasts a thriving leather goods industry, meaning picking presents for friends and family has never been easier. Be sure to sample the island’s own Mahon cheese, perhaps washed down with some Pomada – gin mixed with crushed ice and bitter lemon.

Prices from
£379
Based on 7 Nights, Bed & Breakfast, Including Flight & Hotel

A tranquil location and relaxed atmosphere make the AluaSoul Menorca an ideal choice for an indulgent adult-only escape. Embrace laid back days basking in the magnificent Balearic sunshine or venture out to find your own slice of paradise at one of...

Prices from
£469
Based on 7 Nights, Bed & Breakfast, Including Flight & Hotel

Discover the rugged Mediterranean beauty of Menorca with a holiday to the Insotel Punta Prima Prestige Suites and Spa. Situated in a scenic spot beside the resort of Punta Prima, this sprawling luxury complex invites guests to indulge in the sumptuous...

Prices from
£609
Based on 7 Nights, Bed & Breakfast, Including Flight & Hotel

Enjoy sublime spa facilities and serene pools under a balmy Menorcan sun at La Quinta. A perfect hideaway just as stone’s throw from the beach, as soon as you step foot inside this sumptuous complex you will have left all of your troubles behind.... 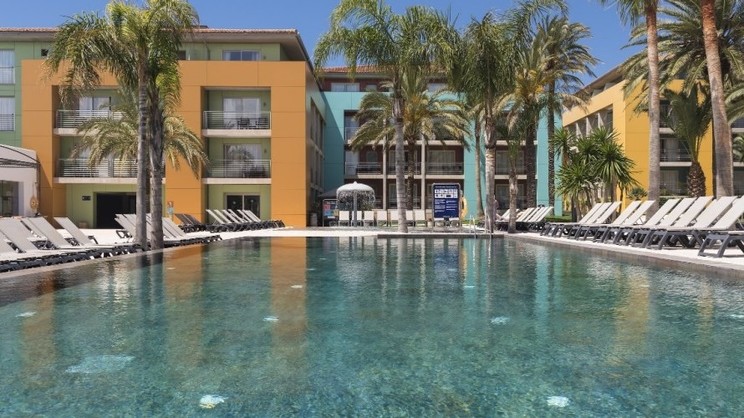 Prices from
£659
Based on 7 Nights, Half Board, Including Flight & Hotel

Share full-filled days or magical romantic moments during an unforgettable holiday at the magnificent Occidental Menorca. Located just a short stroll away from the white sands and crystal clear waters of Punta Prima beach, this stylish hotel features...

Prices from
£669
Based on 7 Nights, Bed & Breakfast, Including Flight & Hotel

Experience a stay amongst the terracotta roofs, cobbled streets and pastel-painted houses in Ciutadella, Menorca. Can Faustino is a grand hotel in the heart of the historic centre where shuttered windows and leafy verandas overlook a long, heated...

Favourable weather throughout the year makes Menorca an appealing tourist destination and a great place to enjoy a fabulous holiday. Spring temperatures range from around 16°C in March to 22°C in May with plenty of sunshine. Summer is the hottest time with around 11 hours of daily sunshine in July and temperatures peaking at around 30°C in August. Autumn sees a significant rise in rainfall although temperatures fall quite slowly to around 26°C in September and down to 18°C by November. Winter temperatures are pleasant and mild at around 15°C and visitors to the island can still enjoy around 5 hours of sunshine each day.

Menorca is blessed with more than 100 magnificent beaches which make this Mediterranean getaway the ideal place for couples seeking a romantic holiday in the sun or families craving an action-packed time on the coast.

An abundance of sun, sea and sand means this laid-back Balearic island is more than capable of delivering a spellbinding beach holiday to remember.

Menorca’s main resorts are in the south of the island and that’s where you’ll find the main family-friendly sheltered beaches. The island’s northern beaches are quieter but stronger winds make them perfect for anyone interested in windsurfing, sailing and other water sports activities.

Son Bou beach is one of the most popular sandy expanses in Menorca, stretching for around 3 kilometres. There’s plenty going on at this Blue Flag beach including kite surfing, kayaking and paddle-boating. Among the attractions to keep the little ones entertained are a giant inflatable aqua assault course.

The island’s capital Mahon is a wonderful city where you can immerse yourself in the area’s rich culture as well as taking to several nearby picture-perfect beaches for some relaxation and fun. Among the most popular beaches near Mahon are Sa Mesquida Playa, Es Grau and Punta Prima.

Cala'n Forcat is a lively resort where you’ll find relaxing sandy coves, superb restaurants, plenty of shops and no shortage of vibrant nightlife.

Ciutadella oozes culture and has a charming old port where you can sip a cocktail at a bar, admire the gorgeous yachts and watch the world go by. The town doesn’t have its own beach but there are some glorious sandy stretches nearby at Cala Santandria and Sa Caleta.

If you wish to escape to a private and secluded sandy haven during your holiday there are dozens of little hidden treasures in Menorca - among them are the virgin Cala Turqueta, Cala Escorxada and Cala Trebaluger. Events and Festivals in Menorca

Menorca hosts a range of entertaining cultural, religious and music festivals throughout the year, ensuring there’s plenty to entertain anyone holidaying in this magical island escape.

From traditional island fairs to elaborate religious festivals, the people of Majorca love to host celebratory events. Here are some of the main ones.

Day of Our Lady of Carmen

The Dia de Virgen del Carmen is celebrated at harbours throughout Menorca and other Balearic Islands in July and his held in honour of the patron saint of sailors. Fishing boats are blessed as part of the celebrations and visitors to the island can enjoy the colourful street parades in Mahon and Ciutadella.

The quaint town of Alaior stages the Festa de Sant Llorenc in August and highlights include traditional dancing, firework displays, music concerts and a nocturnal race for adults and children.

This thrilling event is held in in Mahon in September to mark the end of the summer and takes place in Mahon. It is one of the island's main festivals and features a bumper firework display and impressive parade of horses and a huge firework display.

This feast of Jazz and Blues music last 6 weeks and runs during April and May. It features artists from around the world as well as promoting local musical talent. Many of the live performances are stages in Mahon and Cuitadella.

This lively 3-day event in Ciutadella during the summer solstice in June goes back to the 1300s and features a host of exciting attractions including jousting, equestrian events and firework displays.

What to eat in Menorca

One of the island's most famous dishes is Caldereta de Langosta, which translates as lobster stew. You'll find it in most restaurants throughout the island and consists of lobster cooked in an onion, tomato and garlic sauce and served with delicious fresh bread.

Caldereta de Langosta is a delicious seafood and rice stew or broth made with freshly-caught spiny lobster and other sea produce including monkfish, mussels, cuttlefish, squid and prawns. Arroz de la Tierra is a wholesome favourite comprises wheat which has been crushed in a mortar and baked in the oven with assorted sausages.

Cabrit o Lechona es Forn is a scrumptious offering of suckling pig or roasted kid which is cooked slowly in a wood-fired oven until the meat is extra tender. It is usually served with roast potatoes.

There are plenty of excellent places to eat out in Menorca and among those which are highly regarded are Café Balear, an excellent waterside restaurant in Ciutadella, Can Vermut in Mahon, Cap Roig at Cala Mesquida and Es Moli de Foc in Sant Climent.