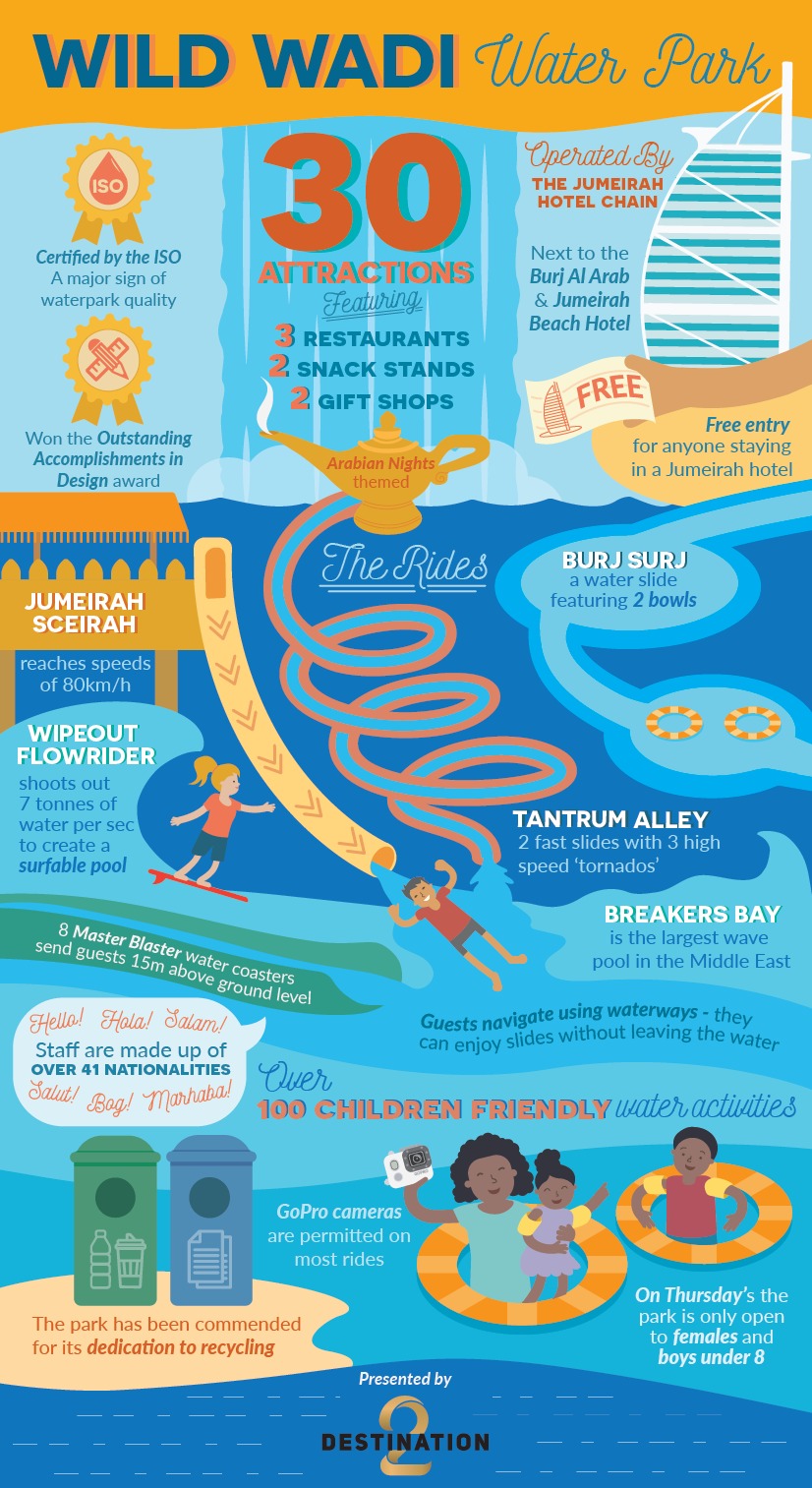 The Wild Wadi Water Park may not the biggest waterpark in Dubai but it is definitely the most densely populated, with over 30 water attractions attractions in a park a fraction the size of the Aquaventure Waterpark .

Located in the Jumeirah region and operated by the Jumeirah hotel chain, the actual park is just in front of the Burj Al Arab and Jumeirah Beach Hotel, giving some truly spectacular views from the top of the higher slides, such as the Jumeirah Sceirah.

As the Jumeirah hotel chain owns the park they offer free entry to the park for anyone staying in one of their Dubai hotels. This means that if you are planning to visit Wild Wadi Water Park and have yet to settle on a hotel then it may be worth considering staying at:

Wild Wadi Water Park includes some of the best water based attractions, not only in Dubai but in the entire Middle East, some of which can even be counted as world class.

We’ve listed some of the best attractions below:

The Jumeirah Sceirah has been renovated lately, in keeping with the park’s constant upgrading. The new version of the water coaster is situated at the top of a 32 metre tower, which has a stunning view of the Jumeirah region, especially the Burj Al Arab.

The ride itself features a chamber that guests enter and are left to stand in for a short while, to build tension. To up the ante a countdown begins before the floor falls through and riders are dropped down the 120 metre freefall slide, the tallest outside North America, reaching speeds of up to 120km/h.

Tantrum Alley is the newest attraction at Wild Wadi waterpark, and is yet another cutting edge water attraction that the park can add to it’s already boast worthy selection.

Tantrum Alley introduced the concept of ‘tornados’ to Wild Wadi, which are high-powered spiral jets that move riders around in circles are dizzying speeds. Introducing the idea wasn’t enough for Tantrum Alley though, as it has 3 separate tornado sections in the ride, separated by thrilling slide sections.

Wipeout and Riptide are among only 4 FlowRider attractions on the planet. FlowRiders, designed by American lawyer and surfing enthusiast Thomas Lochtefeld, are the most accurate way to emulate a surge tide in a man made pool. They achieve this by pumping out 7 tonnes of water per second to create artificial waves. Guests can body-board and kneeboard in the FlowRiders and can even hire them out for private surfing sessions.