2016 truly is the year of theme parks in Dubai. Not only is the new IMG World of Adventure opening in August but also hot on its heels is the rivalling park Dubai Parks and Resorts, opening in October.

Featuring 3 theme parks, a water park, a huge hotel and a central plaza dedicated to shopping, dining and drinking, the resort will total 25,000,000 square feet when completed and have cost ten and a half billion United Emirates Dirham (that’s just under 2 billion pounds!)

The park will be split into 4 distinct zones. The first will be Motiongate Dubai, a park made in partnership with 3 major Hollywood production studios. Bollywood Parks, the world’s first Bollywood dedicated theme park will be the second. Legoland Dubai will be the first Legoland in the Middle East and will be attached to Legoland Water Park Dubai. Finally there will be Riverland Dubai, the main shopping, dining and drinking hub that will also feature the extravagant Lapita Hotel. 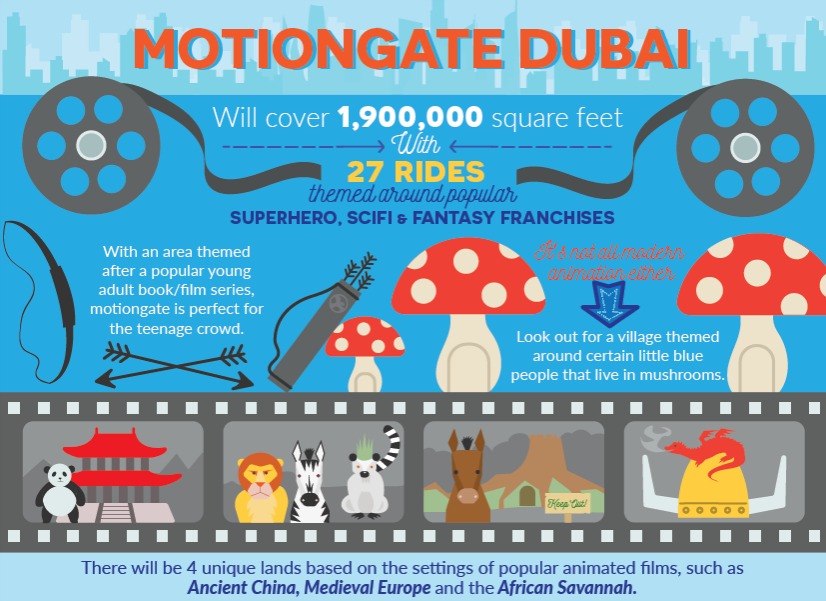 Motiongate Dubai is a collaboration between 3 major Hollywood production studios: DreamWorks Animation, Lionsgate Studios and Sony Picture Studios. The park will have 27 attractions that will cover 1,900,000 square feet, making it one of the biggest theme parks in Dubai.

The Sony area contains a thrilling roller coaster based on The Green Hornet, complete with carts that look just like the character’s iconic classic cars.

There will also be a 4D experience based on the Underworld franchise, where visitors will be shown the history of the war between the vampires and werewolves before taking part in a modern day adventure.

The Smurf’s Village is an area made just for the younger children that features soft play areas and a ride they are calling “the perfect first roller coaster.”

To top it all off the village will even be an accurate recreation, bringing the Smurf’s Village to Dubai.

Taking their rivalry with Pixar even further, DreamWorks have announced that they will have an area at Dubai’s newest amusement park. This park can be seen as the closest thing to a ‘Dubai Disneyland’ there is.

DreamWorks know their audience and are focusing heavily on their big 4 franchises at the latest theme park in Dubai. Expect to see rides and attractions dedicated to Shrek, How to Train your Dragon, Madagascar and Kung FU Panda.

The Shrek attractions focus on family friendly fun, with shows aimed at the whole family, which perfectly fits the new family-ogre that the character had become when we last left him.

How to Train your Dragon as a series lends itself more to fast paced rides and you can expect to have an adrenaline-fuelled time on the Dragon Gliders, the most exciting new roller coaster in Dubai.

Both Kung Fu Panda and Madagascar feature versions of the exciting new Merry Go Round attraction, a version of the fairground classic reimagined for the smartphone generation.

Lionsgate is the smallest of the 3 companies that have come together for the Motiongate Park, yet for a smaller studio they have a large amount of successful films and franchises.

The first few that they are bringing to the Dubai theme park are the wildly successful Hunger Games, which will feature an aerial tour of the series’ Capital City as well as the Capitol Bullet Train, a thrilling ride that will be a serious contender for the title of “Best Roller Coaster in Dubai!”

The second franchise is the popular ‘Step Up!’ series of dance films, and features a stage show with a brand new storyline that follows the local Dubai Hip Hop Dance Team. 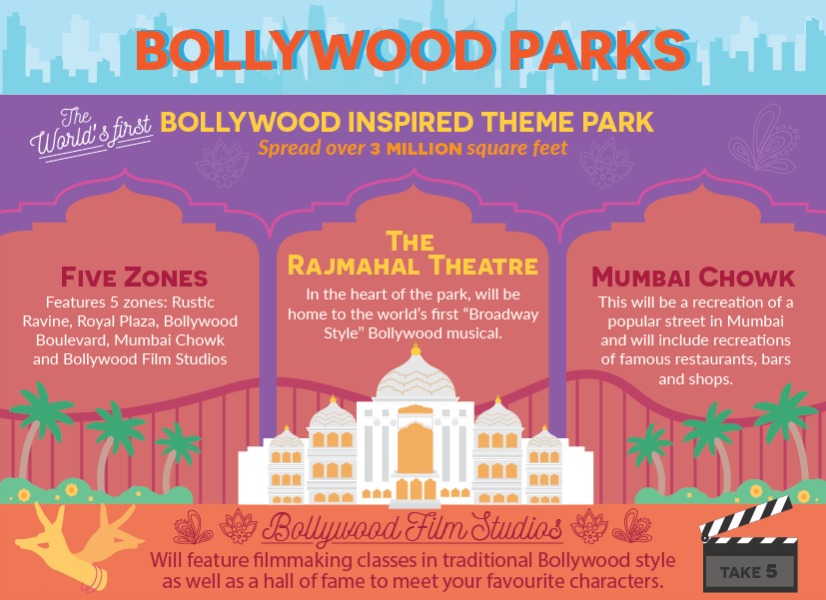 Bollywood Parks is another addition to Dubai’s growing list of world‘s firsts, the first Bollywood inspired theme park! With half of Dubai’s population being Indian expats, it’s no wonder that Bollywood is so popular in the Emirate.

The most original theme park in Dubai is split into 5 distinct zones. These are:

Bollywood Parks separates itself from the rest of the parks with its lack of roller coasters and big rides. Instead the park stays closer to the visual medium that inspired it and focuses on both live shows and theatre experiences.

Each area involves a mix of live dancers accompanied by traditional and contemporary Bollywood songs as well as 3/4D experiences that complement the recent explosion of CGI and special effects in Bollywood films.

The crowning achievement of Bollywood Parks however is the Rajmahal in the heart of the park, which features the world’s first “Broadway style Bollywood Musical.” 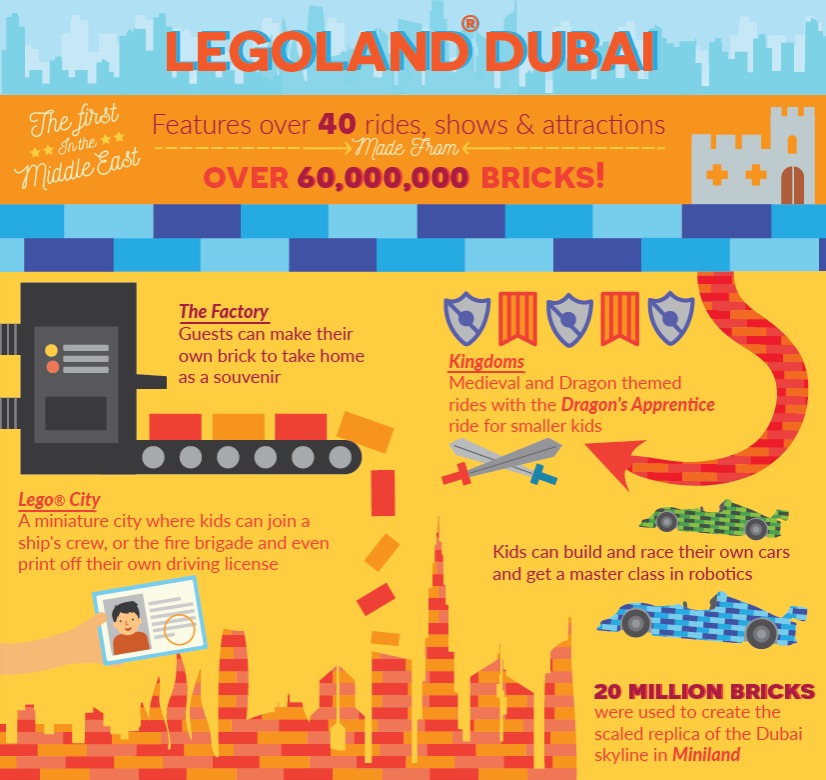 Legoland Dubai is the first Legoland in the Middle East and the first to feature it’s own dedicated waterpark. The park will feature 6 distinct zones:

Factory and Imagination bring the Legoland trend of trying to provide educational fun to the most exciting theme park in Dubai. Factory is a legitimate Lego brick factory that builds the blocks for the toy sets. This educational attraction will teach kids all about the production process and production lines in general. Kids will even get to keep a Lego brick straight out of the cast as a souvenir of their visit.

Imagination features an educational robotics experience using Lego’s Mindstorm brand, which has been used by the likes of NASA. There is also a 3D cinema with 4D effects to enliven children’s imaginations, living up to the park’s name.

Three of the other zones are based on classic Lego toy lines. Lego City is a miniature city that allows children to join the City’s emergency services for fun games as well as earn their own Lego City driving license.

Kingdoms is based on Medieval Europe, with rides based on dragons and knights. The zone features the amazing Dragon roller coaster as well as a nice novelty in roller coasters, a smaller version for younger children called The Dragon’s Apprentice.

Adventure is the home of the popular Minifigure characters and is based around the idea of Adventurers, with rides based around Mummies Tombs and submarines and other watercraft.

The final zone is a Legoland staple with a Dubai twist. Each Legoland has a Miniland, which is recreation of the local city made out of genuine Lego bricks. Minilands usually require millions of brick and this accurate representation of the Dubai skyline uses over 20 million.

Legoland Waterpark is in the Legoland zone but is considered a separate attraction to the main Legoland Dubai.

The park is the first waterpark in Dubai to cater exclusively to children aged 2-12 and has over 20 raft, body and tube slides plus other water based activities.

The main draws of Legoland Waterpark are the Joker Soaker, a giant playground in the middle of a pool and the Build-A-Raft River, where kids can make their own raft to sail along out of over sized, soft Lego bricks. 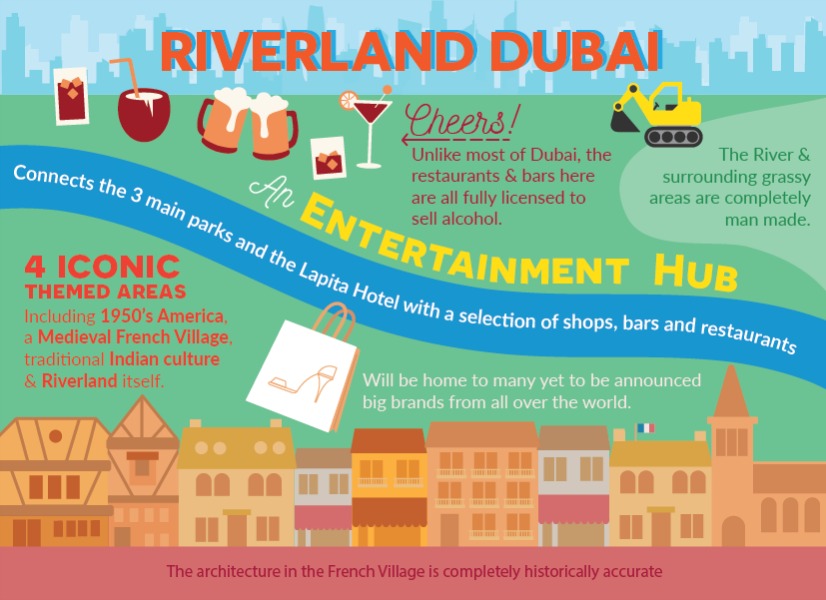 The final part of Dubai Parks and Resorts is the main hub of Riverland, right at the heart of the park that allows access to the other areas. There are no rides in Riverland, instead it supposed to be the place to relax after a day of adrenaline seeking.

From the small number of shops, restaurants and bars that have already been announced, it looks likes Riverland may have a serious claim to being the best shopping mall in Dubai so far.

An interesting fact about Riverland is that all of the bars are fully licensed to sell alcohol. This is a big deal as previously drinking alcohol was only permitted in the hotels in Dubai. There is a Polynesian themed hotel, The Lupita, in Dubai Parks and Resorts but the bars in the rest of Riverland, not just the hotel, are licensed to sell alcohol. It has not yet been revealed how this will work in a legal sense.

Riverland features 4 main areas with different themes, celebrating history and culture. There is an area themed after 1950s Americana, a medieval French village and a contemporary Indian area to go with the Bollywood Parks theme.

The centre of Riverland is The Peninsula, an outdoor concert and festival venue that features both a man made lake and an island.

Only in Dubai would a man made island feature so low down in an article about the amazing attractions at the latest theme park.