£389
Jet off to the beautiful island of Gran Canaria for a feast of sun, sea and sand. Browse our fabulous range of wonderful 4-star hotels and discover what this magical Canary Island has to offer couples, families and friends craving an unforgettable
View Details

£569
Escape to the sun-kissed island of Gran Canaria for the holiday of a lifetime surrounded by amazing sandy beaches, blue azure waters and a myriad of thrilling fun-packed attractions. Take a look at our selection of superb 5-star hotels.
View Details

Combine a superb city break in thriving Las Palmas with an escape into some of the most astonishing areas of natural beauty and conservation you’ll ever see when you visit Gran Canaria. Many see it as its own miniature continent, as the incredible variety of landscapes you will come across during your visit must be seen to be believed. One of the more mountainous of the Canary Islands, it is also one of the most densely populated and boasts bustling urban areas as well as amazing desert beaches such as the Playa de Maspalomas.

Things to do in Gran Canaria

Photo opportunities abound in Gran Canaria, so don’t forget your camera and try to find time for as much sightseeing as you can! The jagged, monolithic rock formations situated in Tejeda – a municipality in the centre of the island – are incredible to behold. Vegueta, the historical district of Las Palmas, is also incredibly beautiful as well as being only a stone’s throw away from the modern city centre where you can enjoy a little shopping and a visit to the excellent local bars and restaurants. Gran Canaria’s beaches are also a major draw for visitors, not simply because there are so many, but also because of the wonderful variety they offer. From the sprawling, desert-like Playa de Maspalomas to the gorgeous man-made Anfi del Mar, there seems to be a beach to suit every tastes, with dozens of activities such as diving, snorkelling and surfing to choose from. The island also has a thriving culinary scene, and produces excellent wines, so don’t forget to sample the local fare!

All of the Canary Islands benefit from superb weather, with Northerly trade winds regulating the heat and ensuring that the climate is pleasant and warm instead of swelteringly hot and dry. Gran Canaria’s temperature rarely varies from Summer to Winter, usually remaining between 20 and 30 degrees Celsius with very little rainfall the whole year round.

The spellbinding island of Gran Canaria is the perfect escape for a magical beach holiday, with its beautiful expanses of golden sand and crystal-clear ocean waters.

Whether you are a family seeking a fun-packed hotel getaway at a lively beach resort or a couple wanting a romantic escape at a more secluded and relaxing hideaway, the enchanting island of Gran Canaria has what you are looking for.

Maspalomas Beach is the longest sandy expanse on the island with rolling sand dunes and inviting blue waters. It is great for families with several water sports zones and there are plenty of hotels nearby, making it ideal for an exciting beach holiday. After a day on the beach you can visit Maspalomas and Playa del Inglés for some entertaining nightlife.

Amadores is a half-moon shaped beach which was man-made several years ago to provide a safe and sheltered sandy setting for families. It has plenty of sun loungers and a range of charming bars and restaurants nearby.

Another lively beach is Las Canteras which is located at Las Palmas. This sandy expanse is sheltered by a lava rock reef, making the sea waters ideal for swimming and snorkelling. There is plenty of activity on this beach and an abundance of shops, bars and restaurants nearby.

Pasito Blanco is a quieter sandy beach in the south of the island where snorkelling and sailing are popular activities, while Taurito is a more rugged beach which is lined with swaying palm trees and a choice or restaurants on the fine dark sand.

Mogan beach is great for families and is nestled next to the popular and picturesque marina. There are plenty of places to dine nearby, with pedalos to hire for an enjoyable time on the blue azure waters.

Several beaches in Gran Canaria, as with other islands in the Canaries, have nudist areas where you can sunbathe ‘au naturale’ if you want an all-over tan. These include parts of El Confital and Maspalomas beaches.

A tranquil choice on the south of the island is Patalavaca with its lovely golden sands and quaint promenade. 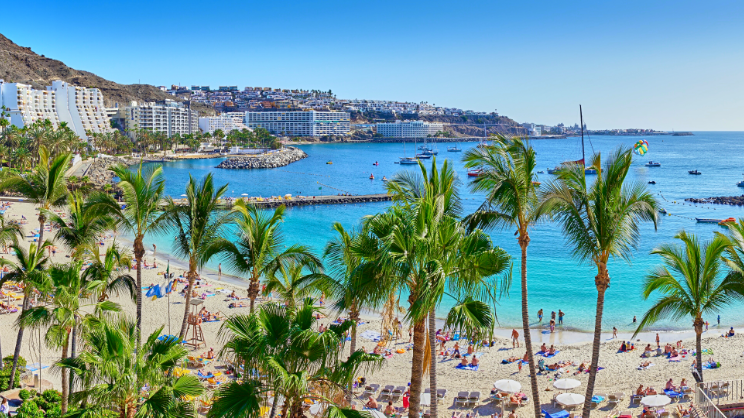 Events and Festivals in Gran Canaria

Gran Canaria stages plenty of festivals, fiestas and big events during the year which all prove popular spectacles for visitors to the island.

An annual carnival is held during February and March in towns around the island including Las Palmas, Maspalomas, San Bartolomé, Agaete and Telde. These lively events involve dancing, singing and participants dressing up in colourful costumes, plus a host of shows and competitions.

This takes place from April 27 to May 4 when the little town of Santa María de Guía celebrates the making of its famous cheese. There is plenty of traditional music and dance, as well as delicious samples of the delicious cheese.

This is the island's biggest car rally which attracts many famous international competitors. It comprises various stages including those at Telde to Ayacata, Ingenio to Tejeda and Artenara to Valleseco.

This religious celebration in late May and early June sees the streets and squares in various towns and villages decorated with carpets of flowers and dyed salt. The biggest event is staged in Las Palmas.

This is a celebration on July 16 of the Virgen del Carmen, the patron saint of fishermen. Statues of the Virgin are carried out to sea in flotillas of decorated boats. Some of the most impressive events are in Las Palmas, Arguineguín, Barrio de la Isleta and Puerto Mogán.

Las Palmas and other ports hold processions on the second Saturday in October to commemorate the Spanish Armada's victory over Britain's Sir Francis Drake in 1595.

What to eat in Gran Canaria

You are spoilt for choice when it comes to finding something delicious to tantalise your taste buds in Gran Canaria - it has many traditional dishes which are worth trying out during your holiday.

Carajacas is a tasty offering where filleted beef liver is cooked with green pepper, garlic, cumin, paprika, olive oil and oregano. It is normally served with boiled Canarian potatoes.

Sancocho canario is a popular dish which involves cooking fish whole and accompanying it with sweet potato, gofio, papas arrugadas and a healthy helping of mojo picón.

Another favourite on the island is Canarian Ropa Vieja, a mouth-watering slow-cooked stew made with meat, peppers, chickpeas onions and potatoes.

Bienmesabe is a delicious dessert you'll come across in many dining places across Gran Canaria. It is made with almonds, eggs, sugar and lemon zest.

Gran Canario has many superb restaurants - among those which are highly regarded are Bochinche Ca Tita in Marzagán, La Marinera restaurant at Las Canteras beach and Deliciosa Marta in Las Palmas.