It’s easy to see why Praslin is often described as a Garden of Eden – the island’s glorious beaches, crystal-clear waters and enchanting jungle interior have to be seen to be believed. Praslin, which was once a hideaway for pirates, is home to charming coastal villages and stunning beaches lined with palm and takamaka trees. Anse Lazio beach on the north west coast of the island is out of this world with its jaw-dropping powdery sands and striking boulder formations. The island interior is dominated by Praslin National Park, a magical refuge for rare birds and plants. Much of Praslin is inaccessible by road, providing an exciting opportunity to discover its natural treasures on foot - a popular option is to hire a private guide to show you around. Praslin is one of two islands in the world where you'll find the magnificent coco de mer palm with its giant seeds which can weigh more than 60lbs. A forest of coco de mer trees can be seen in the Vallée de Mai, a UNESCO World Heritage Site. The weather in Praslin is wonderful with all-year-round sun and the occasional tropical shower. Temperatures average around 28°C. The small village of Grande Anse boasts several superb hotels, shops and restaurants. Popular activities on Praslin include windsurfing, birdwatching, helicopter sightseeing tours, snorkelling, scuba diving, sunset cruises and, if you love your golf, the island is home to a super 18-hole championship course.

Prices from
£2779
Based on 7 Nights, Half Board, Including Flight & Hotel

Create unforgettable memories of the Seychelles on a once-in-a-lifetime holiday at the 5-star Constance Lemuria, on the picture-perfect Praslin Island. Indulge in ultimate relaxation, divine cuisine and heavenly spa treatments during a luxury escape...

Prices from
£1519
Based on 7 Nights, Half Board, Including Flight & Hotel 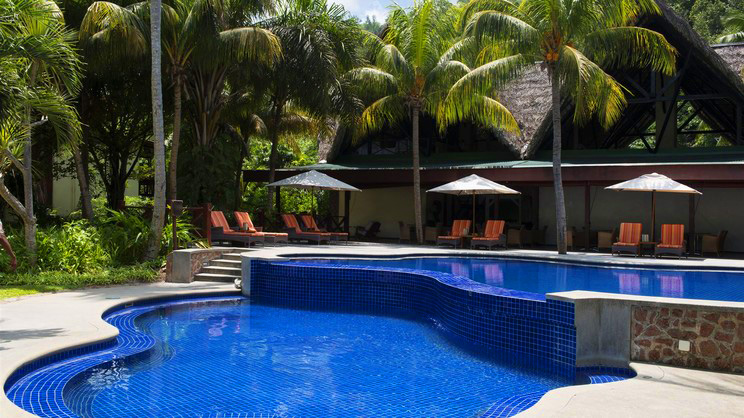 Prices from
£1999
Based on 7 Nights, Half Board, Including Flight & Hotel

Discover the magic of the Seychelles during the tropical holiday of your dreams at the incredible Paradise Sun, on the soft, white sandy shores of Praslin Island. Whether you’re seeking relaxation, romance or family fun, this sublime hotel ticks all...

Prices from
£3199
Based on 7 Nights, Full Board, Including Flight & Hotel

Pure holiday bliss awaits in your secluded, luxury villa, hidden amongst lush tropical greenery at the fabulous 5-star Raffles Seychelles Praslin Island. Enjoy heavenly days relaxing beside your very own private plunge pool, or stretched out on the...