£319
Escape to the spellbinding island of Tenerife where you’ll discover long sandy beaches, crystal-clear waters and nightlife galore. Check out our selection of inspiring 4-star hotels where you can enjoy a thrilling getaway in total comfort.
View Details

£439
Immerse yourself in the delights of sun-drenched Tenerife with an amazing escape to one of our luxurious 5-star resorts. Lazy days and action-packed nights await you in the largest of Spain’s Canary Islands.
View Details

The largest of all the Canary Islands, Tenerife is the ideal destination for sun-seekers, socialisers and lovers of natural and historical beauty spots. Rich with greenery at its heart and surrounded by glorious golden beaches and glittering ocean, this colourful island also boasts the impressive Mount Teide – the highest peak in Spain and all the Atlantic islands - right at its heart, forming the centre of an area of vital wildlife conservation. With almost guaranteed year-round sunshine, Tenerife holidays will suit beach bunnies, culture lovers, explorers and city life aficionados alike.

Things to do in Tenerife

Those who are thrilled by breathtaking natural beauty should visit the Teide National park, featuring the enormous Mount Teide and home to a wide assortment of floral and fauna as a result of its rich volcanic landscape. More intrepid visitors can even take a tour up the side of the volcano. For an urban escape, Santa Cruz is hugely popular amongst those who enjoy visits to captivating art galleries, as well as featuring some of the best nightlife in the region and excellent opportunities for retail therapy. To experience the history and heritage of Tenerife, a visit to Puerto de la Cruz should also be on the cards. The city features many museums, such as the superb Museo Arqueologico Del Puerto De La Cruz (or Archaeological Museum of Puerto de la Cruz), as well as beautiful botanical gardens and areas of lush greenery.

Make for destinations on the south coast such as Américas for year-round sunshine and high temperatures, often hitting just below 30 degrees Celsius in the height of summer. For cooler weather, choose the more mountainous areas or the Northern parts of the island. 5 star Tenerife holidays mean guaranteed sunshine and warm temperatures - even during the winter months!

The magical destination of Tenerife has more than 40 miles of incredible beaches, ranging from long sandy expanses which are popular with fun-seeking families to quiet and secluded hideaways where you can relax and unwind as you stroll along the sands.

There’s a beach for everyone on Tenerife, whether you are a devoted sun worshipper who wants to lie back in the sand, a water sports enthusiast seeking some action on the waves or someone who just likes to gaze out to sea while sipping a cocktail in a relaxing beach bar.

The fact that Tenerife is a volcanic island means many of the beaches have grey or black sand as a result of lava sediment deposited from the eruptions - but there are a few where you’ll find more visually-appealing golden sands.

The popular resort of Playa de las Américas in the south of the island has several beaches - natural or man-made - and the main one is Playa de Troya. This stretch of sand is lined with palm trees and has facilities galore, making it a great choice for families craving the perfect beach holiday.

Playa de la Tejita is among the island’s largest beaches with lovely golden sands. It is fairly secluded and unspoiled, making it popular with naturists and nature lovers.

Playa Del Duque near Costa Adeje is a trendy beach for those who enjoy the high life. There are several classy boutiques, cafes and restaurants nearby and this golden sandy beach is perfect for swimming and catching some rays.

Playa Jardin is a fabulous beach at Puerto de la Cruz, the most popular resort in the north of the island. Stretching for a kilometre, it has lovely swaying palm trees and fine dark sand. The beach is next to Lago Martianez, a popular water park, making it a big favourite with families.

Playa El Médano on the south coast is a popular choice for surfers and a world kite surfing championship is held there each year. There is plenty of water sports action here and there are lots of shops, restaurants and bars nearby. Los Cristianos Beach is also a hub for water sports.

There’s plenty going on at Playa San Marcos on the north coast. Calm waters and rolling sands make this beach ideal for families who want a bundle of fun in the sun.

If you are interested in a quiet and tranquil sandy beach, Playa del Bollullo is a good choice. The cliffs beside the beach offer protection and privacy, while huge waves make it a great place for surfers. Playa de la Arena is also a low key alternative to the busier Tenerife beaches 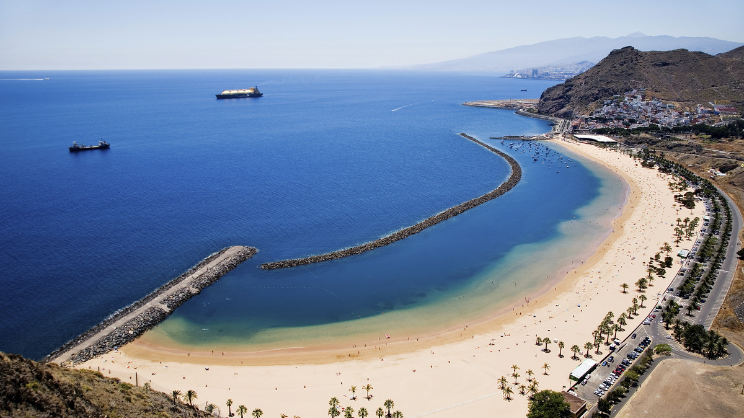 Events and Festivals in Tenerife

There’s an abundance of festivals, fiestas and major annual events in Tenerife which have plenty of appeal for visitors to the island.

Annual carnivals are held during February and March in the various districts of Tenerife, with a major one in the capital Santa Cruz. Huge parades, vibrant parties and revellers in colourful costumes can be seen across the island.

This festival is held in June to commemorate the institution of the Eucharist. The people of La Orotava decorate the town square with colourful sand, shaped as amazing works of art. A procession portraying biblical scenes makes its way around the town, creating an impressive spectacle.

These Festivals of the Cross in June are held in towns across the island including Santa Cruz and Los Realejos. Activities include colourful costume parties, large processions and huge firework displays.

This is held in June in Puerto de la Cruz to honour Saint Telmo and activities include street entertainment and lively parties.

What to eat in Tenerife

It’s always worth trying out a few local culinary delights when holidaying abroad and Tenerife has plenty of tasty traditional dishes to tuck into.

Ropa vieja is a wonderful dish consisting of meat, onion, and chick peas and derives from puchero, a Spanish favourite. You'll find Ropa vieja being served in many restaurants around the island.

Many restaurants serve Conejo en salmorejo, a tasty stew which consists of rabbit cooked in a marinade of wine, garlic, vinegar and spices. Sometimes it is made with tuna or chicken instead.

Pulpo a la Gallega is a simple but delicious dish consisting of boiled octopus, sprinkled with sea salt and paprika. You'll often find it in Tenerife's tapas bars.

Bienmesabe - which translates as 'it tastes good to me' - is a popular dessert made from almonds, eggs, sugar and cinnamon. It's a wonderful choice to follow a hearty main course.

Tenerife is blessed with many fabulous restaurants - among those of note are Restaurante La Vieja in the fishing village of La Caleta, Mesón El Monasterio in Los Realejos and Tasca La Tata, a popular dining place for vegetarians in Santa Cruz.