£359
Jet off to the vibrant Costa del Sol in sunny Spain for a fun-packed 4-star holiday getaway. Check out our superb choice of fabulous hotels where you can leave the stresses of everyday life behind and enjoy an unforgettable adventure.
View Details 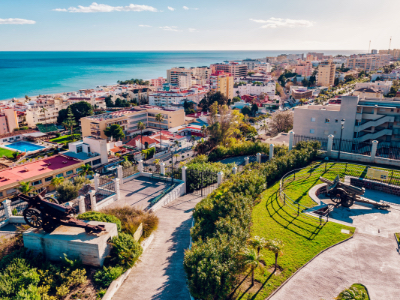 £359
Prepare to be wowed with a luxurious 5-star holiday extravaganza in Spain’s popular Costa del Sol. Browse our range of sumptuous hotels where you are guaranteed an amazing getaway in the rejuvenating Mediterranean sunshine.
View Details

This stunning area of Spanish shoreline has its name for a reason – Costa del Sol means “the coast of the sun”. The most famous of its seaside towns are Malaga and Marbella, but Estepona, Fuengirola and Torremolinos are also excellent destinations. Originally made up of small fishing communities, the area still retains a great deal of the ancient architecture and artisan charm of its past, which can be found in the form of little hidden gems after only a little exploration. The beautiful square white buildings - typical of southern Spain with its touch of Moroccan influence – reflect the golden sunlight, giving the local towns a wonderful glow.

Things to do in Costa del Sol

Often considered a capital of hedonism, residents of the Costa del Sol celebrate a culture of good food and good times. Akin to the British “pub crawl”, Andalusian locals often enjoy what is called “Ir de Tapas”, travelling between their favourite spots to enjoy drinks and tapas snacks with their close friends, thus supporting local businesses and maintaining a strong sense of community. If the arts and culture are your thing, be sure to time your visit to coincide with the Malaga Flamenco biennial celebrations, where you can watch specialists in Spanish national dance perform with astonishing flair throughout the months of June and July. To escape from the urban bustle, pay a visit to Los Reales de Sierra Bermeja – a site of astonishing natural beauty just above Estepona – where you can experience stunning flora and fauna as well as fascinating volcanic rock formations.

Their tourist board’s tagline is “Always Warm” – and that is no word of a lie! During heatwaves at the height of summer – particularly in August - temperatures are known to approach 40 degrees Celsius. As a result, the most popular season to visit is March through to May, when temperatures sit around the early 20s. There is still the potential of light rainfall, but this rarely lasts long!

The magnificent Costa del Sol has it all when it comes to golden sandy beaches for relaxing and soaking up the sun or taking to the crystal-clear waters of the Mediterranean for some thrilling water sports action.

If you crave an unforgettable beach holiday where you can escape the stresses of your normal everyday life, look no further than this popular sun-drenched region on the south coast of Spain.

From the lively beach resorts of Fuengirola, Nerja, Benalmádena and Torremolinos to quieter and more tranquil beach settings to be found near Marbella, Almunecar and Rincón de la Victoria, there’s something for everyone in the charming Costa del Sol. Families seeking a fun-packed beach holiday are spoilt for choice - there are plenty of glorious sandy stretches where you’ll find everything going on from beach volleyball, football and sandcastle building in the daytime to energetic beach parties and live entertainment in the evening.

An abundance of superb beachfront hotels and resorts all along the Costa del Sol means you’ll have no trouble finding a great place to stay, whether you are a couple seeking a romantic escape on the coast or a family seeking an action-packed adventure.

The popular resort of Benalmádena has a charming palm-tree lined promenade where you’ll discover plenty of activity on the beach including kitesurfing, windsurfing and jet-skiing. It also has a myriad of boutiques and shops, as well as a lovely marina.

The town of Nerja has 14 kms of coastline featuring several lengthy sandy beaches and a host of unspoilt bays, while Malaga has several superb beaches which are family-oriented including Playa de la Malagueta and Playa del Dedo.

The coastal area near Manilva boasts some large sandy beaches, with Playa Ancha having particular appeal for families. Fuengirola is a bustling resort with a sandy beachfront stretching for many kilometres and Algeciras has several stunning beaches.

Estepona is another escape for beach lovers, with Playa de La Rada catering for those seeking plenty of activity, while nearby Playa El Cristo is a quiet and relaxing stretch of sand.

Marbella is renowned for its prestigious nightclubs, luxury yachts and up-market boutiques - but it also has some beautiful beaches including Playa de Casablanca which is a great place to relax and sip cocktails at a promenade bar. Another popular beach is Playa de Puerto Banús. 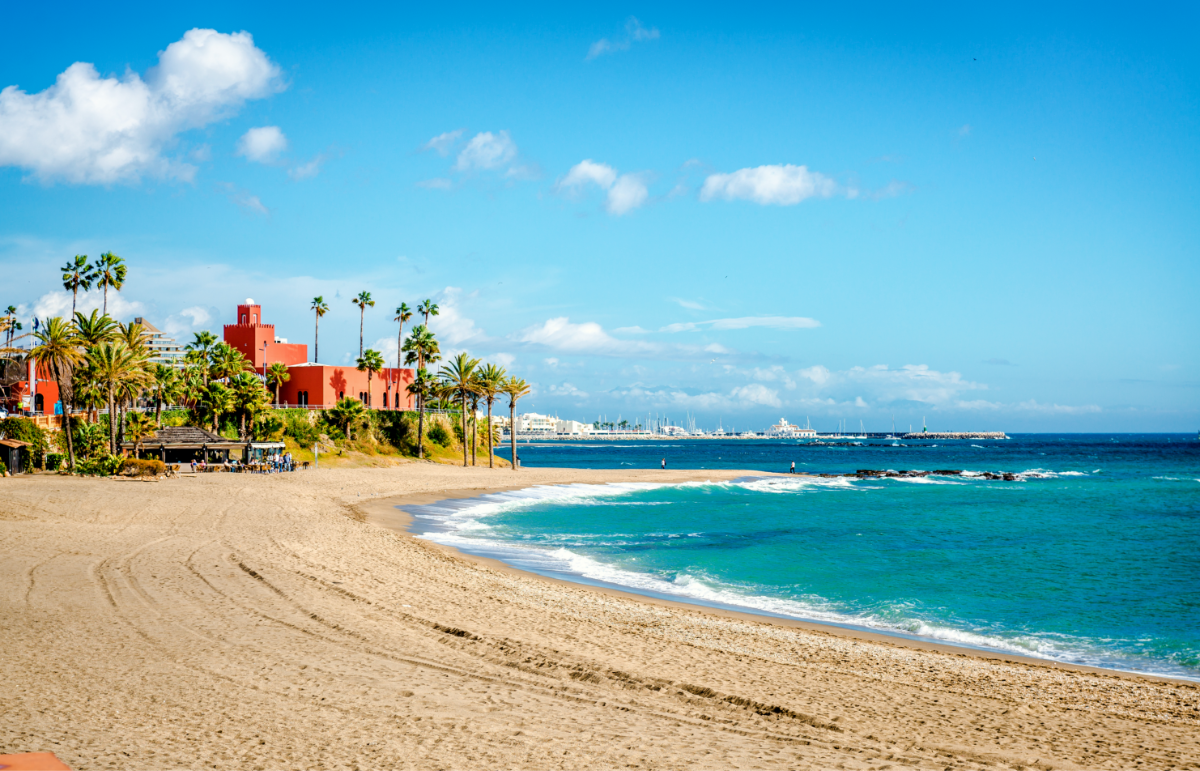 The Spanish love their festivals, carnivals and fiestas - and the region of Costa del Sol certain likes to get in on the action when it comes to annual celebrations.

A host of spectacular events and festivals take place during the summer months to keep holidaymakers entertained during their escape to the sun.

Let’s take a look at some of the main events which often feature colourful costumes, fireworks, music and dancing.

San Barnabé is held in June each year in honour of San Barnabé , the patron saint of Marbella and is an impressive affair which features a week of dancing and music. It gets underway with a huge firework display at the Paseo Maritimo, and this is followed each night with Flamenco dancing and outdoor dining in the town plazas.

Fiesta del Virgen del Carmen takes place on July 16 and is a celebratory festival for fishermen - Virgen del Carmen is the patron saint of sailors. A host of festivities are held along the coast and include a return procession of fishing boats - carrying a statue of 'Our Lady of Carmen'- to Puerto Banus.

The second week of October sees the Feria del Rosario in honour of Fuengirola’s patron saint and perpetual mayoress, Our Lady of the Rosary. Among other attractions it features horse-riding activities, Andalusian dancing and singing in a local fairground area. There’s also a fair for children with shows and entertainment.

Feria de San Miguel is held at the end of September and is the biggest event of the year in Torremolinos. The 4-day celebrations, in honour of the town's patron, The ‘Feria de San Miguel’, attract around 150,000 visitors and feature a host of activities including Flamenco dancing and an extensive programme of music and entertainment.

Fiesta de San Juan is held on June 23, in celebration of San Juan, and is organised along the coast by Málaga Town Hall. The event dates back to an ancient celebration of the summer solstice and features fireworks and bonfires all over the city and on the beach. Among the highlights are the lighting of muñecos or large dolls.

Malaga Feria is held in August and is a spectacular event which comprises a week's worth of music, fireworks, Flamenco shows and processions. This is a truly amazing event which is definitely worth seeing if you are holidaying in Costa del Sol at the time.

Málaga Carnival is an annual event, held in the week before Lent, that sees the town come alive with colour and carnival floats. There are street bands and choirs, with the main parade on Carnival Sunday being a highlight.

What to eat in Costa del Sol

Fish and seafood is hugely popular in the Costa del Sol, with pescaito frito (deep-fried fish) being a big favourite in the many beach bars and restaurants you’ll find all along the coast.

It’s commonplace to find fishing boats serving skewered and roasted sardines and other fish on the sands at Estepona, Benalmádena and Fuengirola.

Other mouth-watering specialities to try during your holiday include suckling pig, rabbit casserole, cuttlefish stew and delicious gazpacho, a cold soup made of blended vegetables.

You’ll find tapas everywhere you go in the Costa del Sol with each town having its own special varieties - Malaga, for example, is renowned for its porra antequerana, pipirrana, ajoblanco, migas and callos.

A popular dessert in Costa del Sol is Arroz con leche, the region's version of rice pudding which is livened up with cinnamon.

You’ll have no trouble finding a dining venue in Costa del Sol which is capable of tantalising your taste buds. Popular restaurants in the region include Toro in Benalmadena, El Meson de Cervantes in Malaga, Aragona Cucina Italiana in Marbella and La Libélula Vegan Café in Fuengirola.