£289
Escape to the enchanting Greek island of Rhodes with its wonderful archaeological sites, jaw- dropping sandy beaches, vibrant nightlife and great shops. Check out our range of incredible 4-star hotels where you can enjoy a fun-packed stay on total
View Details

£339
Marvel at the delights of the sun-drenched island of Rhodes with a stay at one of our luxurious 5-star hotels. Lazy days and lively nights await in this magical Greek island where you’ll discover golden sands, crystal-clear waters and glorious scen
View Details

Enjoy a quintessential Greek getaway with a holiday to Rhodes. One of the bigger, more serene islands in the turquoise Aegean, Rhodes boasts a breath-taking coastline and a verdant, mountainous interior generously carpeted by pines and lush vegetation. Lindos provides the picture-perfect settings with white, sugar-cube houses nestled between a dramatic hilltop castle and sandy cove, whilst Faliraki is a confident, craggy inlet with white sands, crystalline emerald waters and an exciting evening buzz. For a culture-soaked stay on the captivating west coast, Monolithos offers an ancient castle atop pine-fringed rock, from which unparalleled views of sapphire seas can be enjoyed, whereas the UNESCO site of Medieval Rhodes offers a fascinating insight into the island’s history.

Golden sands, glistening waters, fantastic nightlife and a rich archaeological past make the beautiful island of Rhodes the perfect place for an amazing holiday experience.

This magical Mediterranean island has something for everyone when it comes to enjoying an unforgettable getaway in the sun - from long family-friendly beaches at the big resorts to romantic coves and bays in quiet and secluded havens.

Traganou is one of the best places to swim on the island with its crystal-clear waters. This beach, between Faliraki and the village of Afandou, is away from the crowds and has some exciting caves to explore.

The clear azure waters and sugary golden sands of Pefkos beach are very inviting and prove a big hit with families and couples. Snorkelling, diving and trips in glass-bottom boats are popular here.

There are several beaches in Rhodes which are a dream come true for water sports enthusiasts. These include the sands at Theologos, Faliraki, Elli Kiotari and Afandou. Among the action on the waves you’ll encounter are windsurfing, jet-skiing, paddleboarding, skiing, parasailing and banana boat rides.

Agathi is a sandy expanse near the village of Hariki where the shallow waters create perfect conditions for children to swim and paddle. There are a few bars and restaurants nearby.

Lindos Beach is another lovely sandy expanse in an enthralling location surrounded by rocky hills. There are plenty of tavernas close to the beach for a relaxing meal and drink, and nearby Lindos village - with its delightful hilltop fortress - is definitely worth a visit.

A charming monastery looks down over Tsambika beach, an unspoiled spot to catch some rays in a captivating wild and rugged setting. 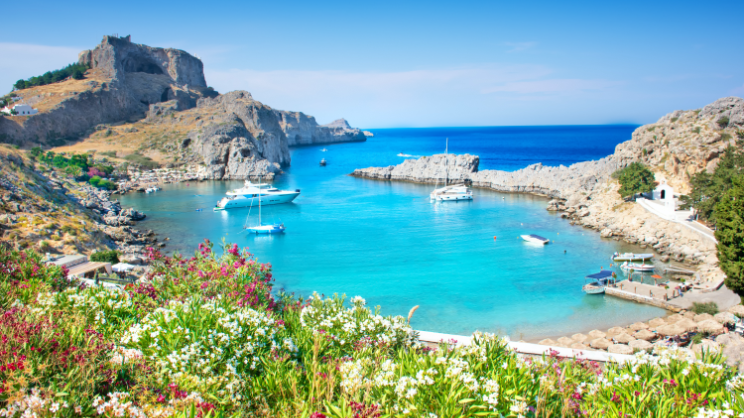 Events and Festivals in Rhodes

A host of festivals and major events are held each year in Rhodes, including those associated with the island’s rich Byzantine and medieval history. Here are few worth checking out if they are happening during your Rhodes holiday.

This was founded in 2005 and it takes place at the end of May in Rhodes Old Town. It includes an impressive range of attractions including concerts, exhibitions, theatrical plays, banquets, musicians, jesters, jugglers, fire eaters and dancers.

This is a major event on the island in August where audiences of all ages are invited to enjoy documentaries and films on ecological and environmental issues.

The Assumption of the Virgin Mary

This is held on August 15 in a charming church in the village of Kremasti. It is a celebration of the Assumption of the Mother of God and the Novena Afterfeast for the Assumption. It is attended by locals from Rhodes and visitors from other Greek islands.

This unique event takes in Apolakkia, focusing as you would expect on the humble watermelon. Visitors are treated to drinks and delicacies and given the opportunity to join in fun games.

What to eat in Rhodes

There are plenty of flavours to savour when you choose to dine in one of many fabulous tavernas and restaurants you’ll discover during a holiday to Rhodes.

Koulouria is a kind of pasta which is cut into strips and then cooked in goat's meat broth or water, with a healthy helping of tomatoes.

You'll often see Gemista in Rhodes which are Tomatoes, peppers, aubergines or courgettes which are stuffed with mince, rice, onion, tomato and parsley.

A tasty appetiser is pitaroudia which consists of fried balls of chickpeas mixed with chopped mint, onions and tomato. Another popular starter is cyclamen leaves stuffed rice and lentils.

Pastitsio is similar to lasagne and is often found in restaurants in Rhodes. The main ingredients are pasta, minced meat and bechamel sauce. A popular delicacy is karavolous, snails cooked in a tomato sauce with onions and oatmeal or cumin.

Amarangoi is a favourite with the locals on the island and consists of boiled daisy shoots served with skordalia, a delicious puree made from crushed garlic and potatoes.

A scrumptious dessert is Loukoumathes which are honey dumplings that have been spiced with clove and cinnamon. They are then covered in honey and sprinkled with powdered sugar.

Among the many restaurants of note in Rhodes Marco Polo in Rhodes Old Town, Mavrikos in Lindos, Kyma Beach Restaurant and Artemida in Psinthos.